Welcome to the Storm of Ash blog tour.

This book sounded interesting and the sort of thing to distract me from all of the commuter chaos thats been happening around me on the trains lately.  A half hour delay doesnt matter when you have a good book! What I didnt know what that this was number in the series.  With two weeks to go I had to decide, do I plunge into book three, and potentially miss out on the backstory and some amazing adventures or do I make time and read all three in two weeks.  I have so many books that I ve brought at the moment, and with work, and uni work due what should have been an easy decsion put me in a quandry.  Then I spotted book one – Book of Fire was only 99p on Amazon. I figured I could always skip book 2 if time was short!

So, I flew through the first book, not because of my time limitation but because I loved it.  Its got a weird feel because its the future but also the past.  Talia is an outsider – she lives in the wild in a community that to her is perfect, its home.  But she ends up going into the domes to save those she loves and learns how they love and what they believe.  The two communities exist because of the Great War, and the ‘inside’ although scientifically advanced are living a life based ont he ancient Romans, including their behaviours, civiliation system and even names.  Talia cant believe it, and when she meets the

Gladiator Soldier August she doesnt know whose side hes on. Theres some crazy creatures, including a monkey I really want to be Tals new animal pal, Unus the cyclops and then the scarier beasts.

“Why run when you can fly”

At the end of the first book (aka 2 days later for me) I was instantly on Amazon getting book two – City of Dust.   We’re 12 months on from the end of book one, and Talia is still keeping secrets from people, even her BFF Max, who despite being with her through thick and thin can seem to win her heart. When Talia learns the inside need help she immediately heads off and tries to save the day.  Book two had some twists I didnt expect, and didnt enjoy because I was invested in the characters.  We’d already lost people in book one that made me emtional I didnt want Tal to lose anyone else.   As this book progressed we learn more about ancient mythology and Max’s ( her brothers)  Dr Dolittle abilities and it made me want the characters to be okay. Its one of those I dont want more peril, I want them to be okay, but I need more of this book – I love it feelings. ( Im not even annoyed that 2 days after buying book 2 it was also reduced to 99p)  Any before we forget, more monsters, bigger and scarier than before…  but as we ve learned not all monsters are bad.

After the whirlwind of the first two books we are here with Storm of Ash. Book three.  Tal has made it back to Arafel but the fight with Cassius isnt over.  His ‘Hominum chimera’ aka Lake is still out there, and he wants the real DNA recipe for it.  August thinks there are other outsiders and hoeps to rally them for support, but my favourite part of the book starts with the fact that Unus is still with us. And the most important question for me is where is Jas?

Storm of Ash feels like its covers alot of ground. Its action packed, its fast paced and more than a little entrancing.  we switch between the outside and inside again, with a few gems inbetween.  Tals actions almost feels little cyclical – but this is a natural progression for the book and doesnt feel like a repeat so much as a new challenge.

Talia needs to save Arafel, reclaim the book and fufil the promise to her grandad. All with some seccret hidden inside her, friends disappearing and confusion about who she can really trust.   Usually in this genre a fantasy book is all about magic, but its the science that makes thes the story even thought we dont really see it. Talia hasnt grown up in a restricted world, she lives with the animals, like an animal, so when the time comes to do the right thing its about her flawed humanity doing the right thing.

There’s fights, battles, victories and loss throughout the book which keep you turning the page to see what happens, who will come out on top, who will survive and if that little apricot monkey will amke a reappearance!  We meet new mythical creatures continually in this book and the only thing that would have made it better for me would have been some sketches of the creatures – to see if my imagination created the same! (Personally I think this is the perfect job for Quentin Blake!!)

For me the the one theme threading through all of the books is about the balance of nature. Life in Arafel is about balance, only taking what you need and working with nature.  Allowing history to be just that – History. I think this is a really important thing in a book like this, because even though different people live in different ways, we must learn to live together, to adapt as its how we will survive. Running through Tals narrative is exactly this idealogy and I think it is not a a relevant but also valuble characteristic for the story.

“come what may, nature finds a way…we take what we need to survive, nothing more Talia… All life has its palce within the forest, including us…” Talias Grandpa 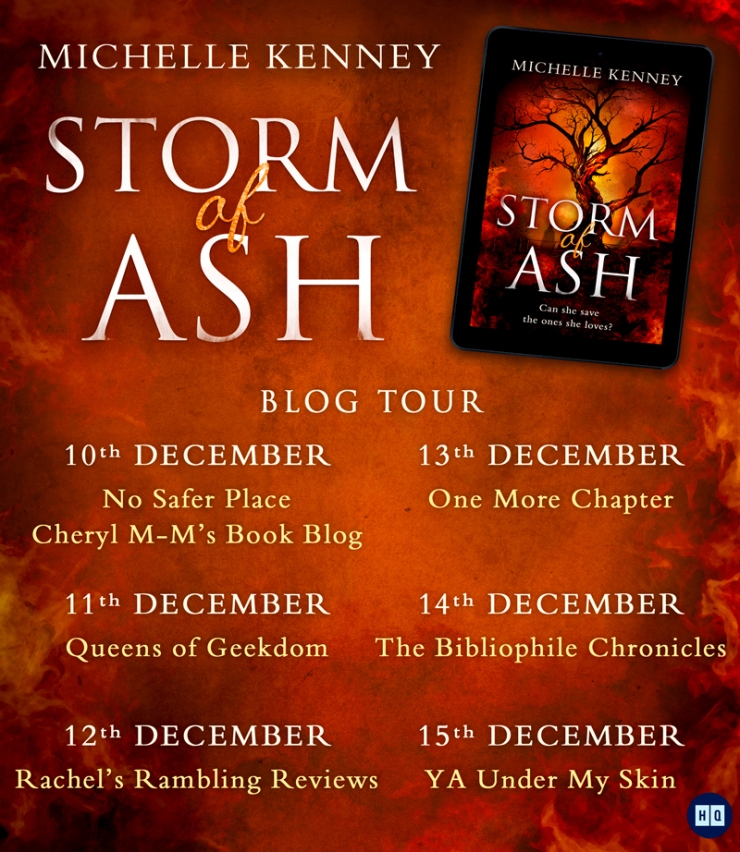 I did wonder if this might take a similar route to divergent or the hunger games and end up as a movie, as it ticks all the boxes but when I googled it theres already what looks like a film called Book of Fire with a silimar story, but different names. Im not sure if this is linked, coincidence or just my brain not understanding. Anyway, Storm of Ash is available now!

Every now and then I realise that whilst Im reading my hubs is trying to talk to me. ( I know he needs to learn!) On the rare ocasion that I answer sometimes he asks what my books about.  This was one such occasion that made me laugh when I tried to fit into one sentence the three books so I could stop talking and carry on reading.

Its a booked based in the future after a great war but all about the past with Romans, mythical creatures, and a pet snow leopard.  Oh and theres a really important book.  Think Gladiator mixed with Tarzan /Petes Dragon (the new one) and the Da Vinci code.