As a fan of C.L. Taylors other books ( The Missing, The Accident, The Lie) this book, The Treatment instantly went on my to read list. Then I found out it had been reduced to 99p on Amazon and it went straight to the top!

The Treatment is the story of Drew Finch, whose brother is at a reform school, she doesnt get on with her stepfather, and is bullied at school. Unlike everyone around her Drew refuses to accept her real dad committed suicide when she was younger.  Whilst trying to evade bullies Drew is pulled into an alley and suddenly everything changes. 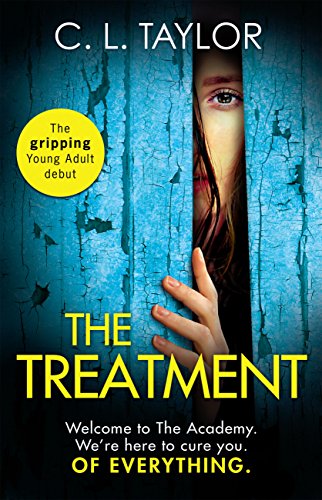 Drew is shipped off to the same reform school her brother, Mason is at. Shes knows something isnt right, and the ‘robot like’ students that have been treated cause her further concern. Whilst finding a friend in Mouse she also learns that theres a bully everywhere (Jude) and the new boy Israel is trouble!  Jude finds that misbehaving can be effective, that her research and interest in psychology is  valuable, and sometimes real friends are as good as online friends.

The book is fast paced and well written. We learn a lot about Jude and just a little about the other characters, but that doesn’t matter; we know basic personality traits and that’s all the story really needs. Theres an interesting nod to historical brainwashing processes and the power the government would easily benefit from whilst having unwavering ‘trust’ in the control of their soldiers. Set a few years in the future it has a current but almost dystopian feel to secret projects in the UK which would sit well in the US aswell.

You can buy the book on Amazon HERE!

“You have to help me. We’re not being reformed. We’re being brainwashed.”

All sixteen year old Drew Finch wants is to be left alone. She’s not interested in spending time with her mum and stepdad and when her disruptive fifteen year old brother Mason is expelled from school for the third time and sent to a residential reform academy she’s almost relieved.

Everything changes when she’s followed home from school by the mysterious Dr Cobey, who claims to have a message from Mason. There is something sinister about the ‘treatment’ he is undergoing. The school is changing people.

Determined to help her brother, Drew must infiltrate the Academy and unearth its deepest, darkest secrets.

Before it’s too late.